Rather embarrassingly it’s taken over 20 years to get around to playing any of the Monkey Island point and click adventure games. To be fair though, the first entry to this series was released in 1990, the year after I was born and the gaming bug didn’t hit me for several years yet. The more I heard about the series though and it was overwhelmingly positive, I knew I had to play at some point (even if just to prevent further incurring the wrath of people who seem to think that all gamers have to have played all the classic games in existence). Then of course, it ended up sitting on my ‘to play’ list for god knows how long. The thing about older games is that when you want to go back to play them, whether you loved them as a kid or not, is that sometimes it can be a pretty disappointing experience. That doesn’t necessarily mean that the game wasn’t excellent in its own right or that it wasn’t an important entry in the history of gaming, but the truth is that many games just don’t age well. In fact games that you used to think were good might actually find to be pretty much unplayable when you go back to it decades after the fact. The Secret of Monkey Island by Lucasfilm Games (as LucasArts was formerly known as), however, is not such a game. In fact, it really was love at first click. I might even venture that it’s now one of my top 5 favourite games of all time. Not bad for a game almost as old as myself. END_OF_DOCUMENT_TOKEN_TO_BE_REPLACED 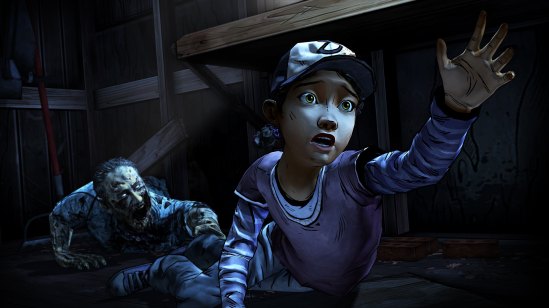 It’s no secret that I’m a big fan of the episodic The Walking Dead: Season One by Telltale Games. This actually came as a bit of a surprise to me. Interactive fiction just wasn’t my thing… or so I thought. Right from the first of the five episodes that make up Season One I was entranced. What’s not to love? It’s got it all – amazing stories, great writing, complex and realistic characters and a tense atmosphere that never abates. So of course, I had to play the two episodes of Season Two that are out so far, because I just have to know what happens dammit! Obviously since it’s not all out yet, I can’t judge the whole story arc or give a fair review of the season, but I still wanted to get my thoughts down about the first two episodes, in case there are people out there who haven’t played it yet and want to know how it stacks up so far against the incredible first season. END_OF_DOCUMENT_TOKEN_TO_BE_REPLACED

The Walking Dead is an episodic  point and click adventure game by Telltale Games. I’ll only be talking about the original 5 episodes as I’m planning to review the 400 days DLC separately. This game reminded me why I love this genre so much (although it’s not really the kind of game I typically play) and it does it in a different way that’s more action-y than your standard adventure game (as opposed to an action-adventure game), true to its source material. I haven’t read the comics that the game was based on, but I have watched the TV series, which is now one of my absolute favourites. The game has got everything I love about the zombie genre and what I like about the TV show – it examines the effect an apocalyptic event like this would have on people and explores the darker side of humanity that exists even now. Sure, I like games like L4D that are just about shooting zombies, but The Walking Dead is truly a gem in its genre and in the game industry generally for achieving a level of tension, emotion, depth and believability that many games can’t and for going places others won’t. It is an undoubtedly flawed game and one that not everyone will enjoy, but one that definitely deserves some recognition.